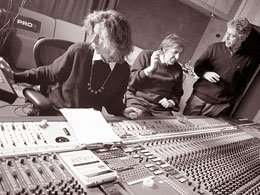 Marti started her engineering career in her hometown, Seattle, in 1977, apprenticing under the expert wing of Peter B. Lewis, from whom she learned the ropes of radio and television post-production. One year later, her love of music and desire to grow professionally brought her naturally to move to New York City. She was hired as assistant engineer at Automated Sound Studios, one of the most important jingle-production studios in the late-70s and 80s. Under the guidance of engineers such as Elliot Scheiner and Artie Friedman, and working daily with some of the most talented musicians and production people in the country, her career grew quickly. Just two and a half years later, at 22 years old, Marti left Automated Sound as a staff engineer and “went free-lance”. She started working regularly in historical studios such as A&R and The Power Station (which became Avatar), The Hit Factory and Skyline, and broadened her recording expertise working on projects with artists and producers such as Marcus Miller, Phil Ramone, David Sanborn, Don Grolnick, and Michael Franks, among many others. In 1986, Marti moved to Milan, Italy. Her many years of engineering experience and musical training (she studied the clarinet, saxophone and flute through school and into college, and privately with Eddie Daniels while in New York) opened the door to many new experiences. Aside from studio work, she began working live as FOH engineer for Eros Ramazzotti’s 1990 European Tour. That was the beginning of a whole new phase in her professional life. She has worked consistently over the years with the most important names in Italian pop and jazz music, both in the studio and live.

The desire to help smaller clients bring higher quality to their productions, particularly jazz musicians and young, up-and-coming pop artists, stimulated Marti to invest in her own equipment. She put together a recording/mixing facility, functional both at home and on-location. Being autonomous made it no longer necessary to live in a big city like Milan and in 2002 Marti moved to Cagliari on the beautiful island of Sardinia, off the southern coast of Italy. While she continues to travel and work on the mainland, she has a full control room setup in her home from which she does editing, mixing and mastering. The advent of broadband internet makes it easy to work with clients even at a distance.

In 2016, she opened a recording facility, janeStudio, and the MGJR record label. The 700 sq ft recording space, with an open control room, is complete with a lovely Yamaha Concert Grand Piano.

In 2012, Marti took the Kundalini Yoga Teacher Training course and in 2013 began a parallel activity as a yoga instructor. She continues to deepen her study and practice in the desire to help others through this discipline.

Since 2014, Marti teaches Recording Technology and Techniques in the Electronic Music department at the Conservatory of Cuneo.

As of 2019, she is also teaching Recording Techniques for third-year and graduate school students at the Saint Louis College of Music in Rome.

She has started a collaboration with the Experimental School of Cinema in Rome, mixing the music for the graduating students’ short film Theses.